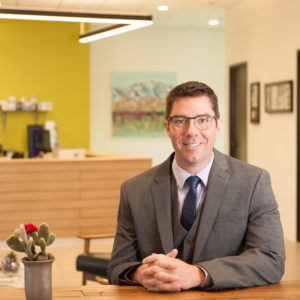 Kyle Smith, OD, grew up in a small town in Iowa before going to Wheaton College in the Chicago area, where he majored in biology and sang tenor in the Men’s Choir.

After completing his undergraduate degree he moved to Portland to attend Pacific University College of Optometry on an Army scholarship, during which he completed externships at Fort Richardson and at Bascom Palmer Eye Institute at the University of Miami. In his first year in the Army, he completed advanced training in Family Practice Optometry at the State University of New York College of Optometry in Manhattan while stationed at West Point.  He then completed tours in South Korea, Germany, and Iraq, before being stationed at Fort Richardson.  He continues to serve in the Army Reserve in Alaska and has completed humanitarian missions in Thailand.

When not helping families with compassionate eye care Dr. Smith enjoys biking, running, woodworking, and traveling – and has run a marathon on all seven continents.  Dr. Smith and his wife, Erika, have two young children, Quincy and Thatcher.

Dr. Smith has been a Fellow of the American Academy of Optometry since 2006 and served on the Fellow Admittance Committee for many years.  He has served as adjunct clinical faculty for both the State University of New York and Pacific University, where he earned the highest rating for excellence in clinical education.

He has published on advanced contact lens techniques for managing keratoconus and lectured on topics ranging from eye injuries to medical coding and infant contact lenses to learning disabilities.  He recently earned a master’s degree in international relations from the University of Oklahoma.

You can schedule your next appointment with us online!

Leave Us a Review

Please take a moment and let us know how your experience was.

Let's continue the conversation over on your social network of choice.